Marie-Louise Erasmus was on   Coastal Radio SA.  Martin Nel, the host of the show emailed me asking me to please do an article on this lovely young actress. She is young and already accomplished so much in her life. Currently, she is playing the lead role Rose in the series The Practitioner. She has also appeared on the popular South African series 7de Laan as well as been featured on Getroud met Rugby. 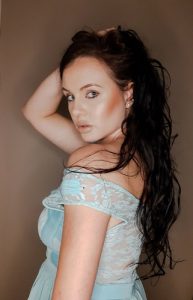 Please tell us a bit of your acting and modelling history.

With modelling I met a lot of amazing people. Because I studied drama and wanted to become an actress, I thought I would love to try acting out. In 2007 I met my husband, and he introduced me to the film industry. Then in 2012 I joined my Agency DJ’s Model Agency where I was cast for a few TV Commercials. I then realized how much I love acting and wanted to do series and films.

I have done Flora Buttery TV Commercial, Nestle My Mug & Me campaign. I have featured in Getroud met Rugby, The Furnace Film, The Truth, Fighting Alone, Evenge Film, Vertrou Niemand Nie, The Last Night Lockdown Short Film, Weapon of Change, Ek Kan Nie But I Can, Binnelanders, Invens Smartphones South Africa. My future plans are most definitely to go to L.A to further my career as soon as it is safe to do so. What was one of your most memorable moments in the industry?

My most memorable moments in this industry I would most definitely say was meeting my Soul Sister Jamie Bernadette who I met working on a film, and then also going to Mumbai and meeting Ajaz Khan. Those are two amazing people who have helped me and guided me. Working with my 3 acting coaches Karin Retief/Fourie, Elma Potgieter and Johan Engelbrecht has also been amazing. What challenges have you had to face?

The biggest challenge I have had to face was losing a daughter, she was a year and 8 months old. Also, losing people who didn’t support me in my career and didn’t believe in me.

What was your character like on Weapon of Change?

My Character on Weapon of Change, her name is Isabel, the moment I read my script and got to know my character I fell in love with the character. She is so similar to me and in the story, she handles situations exactly how I would. It was so easy portraying my role as Isabel. What would be your ideal role?

What advice would you give to someone starting out an acting career?

Always believe in yourself, don’t borrow out your ears to people, not everyone is there to give you good advice. If I can do it, so can you!

Take all the Negatives and turn them into Positives. It’s a tough industry, don’t expect it to be easy. Enjoy it and embrace every opportunity. 7 tips from a psych ward patient 9 reasons I make a terrible influencer